Bicycles BH (Beístegui Hermanos, also called BH Bikes) is the name and one of the trademarks of the company Bicicletas de Álava, S.A. Historically, the initials BH come from Beistegui Hermanos. The company, a bicycle manufacturer, is based in the Basque town of Vitoria, in Álava (Basque Country, Spain), although it is originally from Éibar (Guipúzcoa). It is one of the most important manufacturers in Spain and has international representation. It came to manufacture more than three thousand bicycles a day and had a significant international expansion. 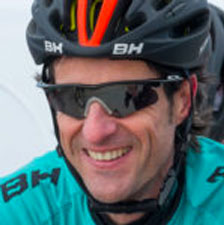 Mikel Zarrabeitia Uranga, born on May 14, 1970 in the Basque town of Abadiano, province of Vizcaya (Spain), is a former professional cyclist between 1991 and 2003.

The best result of his sports career came in 1994, when he finished second in the Vuelta a España, behind Tony Rominger.

In the return to Spain 2002 he managed to wear the gold jersey one day after the stage in Sierra Nevada.

He collaborates with us at Basque Country Bike and is our brand ambassador.

Save products on your wishlist to buy them later or share with your friends.

No account? Create one here
Product added to wishlist